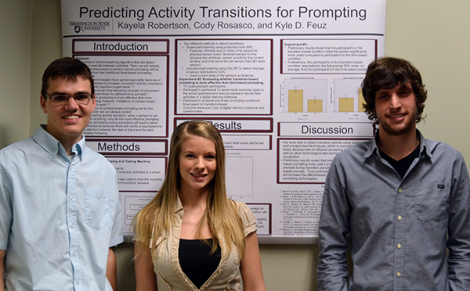 Kayela & Kyle: Focus on contribution to the design, ideas, writing of papers, as well as data collection and reporting

Cody: Transition detection and script writing for algorithms so that sensor data can be generated

The end goal of this project is to give the digital memory notebook to someone who has Alzheimer’s and have them actually start using it, as well as determine if it is an effective invention.

Participants are brought in to run through 12 activities. The first part focuses on detecting those parts as they move from activity to activity in a natural manner. They are instructed on what to go to next before they organically move on to the next step.

Subjects: Undergraduate students (currently). The long-term goal is to develop a system for older adults. There are 15 participants all being tested  on the same activities (although not in the same order)

Activities: Simple tasks are included such as sweeping, watching TV, reading a magazine, dusting or doing a math problem

Quality: Performance and completion of the task is not relevant but rather the focus is observing the individual take the steps to complete each task – watching them as they do it and noting pauses, stops, transitions (i.e. going from watching TV to sweeping – do they turn off the TV and put the remote down? What are the transitional actions?)

Data Capture: While they are doing all of these activities – sensors are collecting data. The data is fed into the algorithm and transition behavior is detected and recorded.

Activities: The focus is on evaluating the best time to deliver prompts. The prompts are designed for the use of the memory notebook – a tool individuals with dementia would use to write down what activities they have completed. The subjects record the activities they have accomplished and the researchers prompt them to use the memory notebook based on either time or the task they are doing. There is a time-based condition and a contact-based condition.  The timed-based condition prompts the participant to use the notebook every five minutes and the contact-based condition is where they get prompts to use the notebooks during transitions.  They are trying to determine whether or not it is better to give prompts during transitions or to give prompts based on time.

The notebook is like an iPad and functions like an app. It was designed off of a paper-and-pencil concept known as the memory notebook used in current intervention studies. The notebook includes a lot of different things like personal information, medications that they need to take, daily logs of what they have done that day, things that they can remember like to do lists, calendars and contact information. The preliminary data has shown that the pencil and paper intervention is very effective, so the hope is to take the digital memory notebook and make it even more effective with the use of prompting and smart home technologies. The main challenge is training individuals to use the technology.

Preliminary data has been collected to-date on about 16 subjects. Some data has been analyzed so far, yielding promising results. It shows that when participants are in the transition-based prompting condition, they tend to use the memory notebook or respond to the prompts about 30% more than the people in the time-based prompting condition. They are also asked to complete a questionnaire asking them how useful the prompting system was and people in the transition-based condition rate the system as more useful.

The course ended at in May 2013 but the three students continue the research as they develop plans to maintain the experiments with older adults,